Long before photography became my full-time career I spent many years as a full-time musician, playing restaurants, bars and corporate events around Phoenix.  Almost everybody on my mom's side was a musician so it came naturally for me.  I like to say I haven't had a "real job" since around 2002.

It all started in Houston when I was about 15 years old and wanted to impress girls.  I thought I'd try playing guitar so I could wow the ladies with my rock-star persona.  I soon found I was really drawn to bass guitar and remember thinking "4 strings on a bass instead of 6 on a guitar...I should be able to learn faster and impress the girls even sooner."  I saved up and bought a bass on December 7, 1980.  I remember the date because Dad drove me and said "why the hell do you want to play BASS??  Nobody listens to the bass player!"  Thus, a rebel was born.

Bass came naturally and I learned fast.  I had every Rush, Van Halen and Yes album learned note-for-note within a few months.  However, my "persona" was overshadowed by my corduroy shorts, rainbow suspenders and mushroom-afro hairdo.  Hard to believe the girls weren't turned on...

Yep, this was me, the ladies' man! 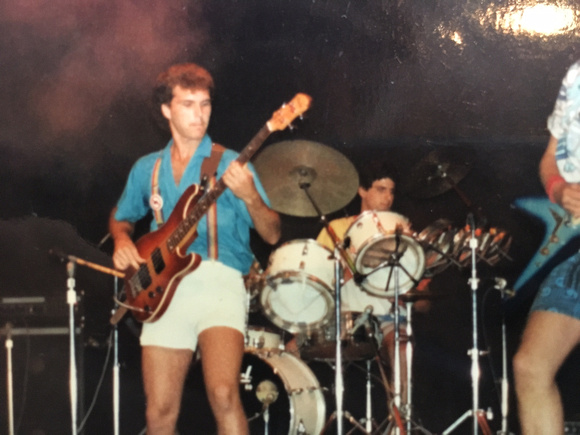 I wondered if Dad was right but, in typical teenager fashion, I always did the opposite of whatever he suggested.

Over the years I also learned guitar and keyboards which came in handy and I played in a lot of different bands around Austin during and after college.  After a few more years in New Orleans I moved to Arizona.  I had a few different jobs waiting tables, then sales, then I eventually started playing guitar in nice restaurants like Eddie V's and Ruffino, as well as plenty of trashy dives where my guitar had more strings than the crowd had teeth.

I also learned how to sing and wound up making a pretty good living playing 6-7 nights a week.

Then in 2006 I met Julie through a mutual friend.  When she mentioned her chihuahua I said "hey, I do pet photography and need photos for my website...why don't I come over and photograph your dog?"  And that's how I got the first date.
We got married a year to the day later in 2007 and Reagan came along in 2008; we wasted no time.  I guess my biological clock was ticking.  As Reagan got older I learned my music ability made me "the cool dad."

Around this time I was getting busier with photography but was also drawn to a new gig: DUELING PIANOS!  I heard a bar called The Shout! House opened in Glendale so I auditioned and got the gig!  It took awhile to get the hang of it but I wound up playing 3-5 nights a week while still juggling the guitar gigs and my growing photography career.  Eventually photography got so busy I left music altogether but those were some of my most memorable times as a musician.  I actually got paid to crack jokes, make fun of people and sing dirty songs...that was the life!

For those of you who are interested, here are some videos of me on the various instruments:

So know you know more about me.